Everything You Need to Know About GFCI Outlets

A ground fault circuit interrupter (GFCI) is a special type of circuit breaker outlet that can automatically shut off power when it detects problems like an electrical fault. A GFCI outlet is the only thing standing between you and electric shock when near a damp area like a faucet. Since GFCI outlets were introduced in the 1970s, electrocutions have dropped 83 percent. These fast-reacting outlets sense when an electrical current is straying and immediately shut off electricity flow.

While GFCI outlets are required by code in new construction, it’d be wise to change out your standard electrical receptacles if you live in an older home. An estimated 43 million American homes are without GFCI protection.

In a perfect world, electricity would travel straight through insulated wires to switches and wall outlets without incident. However, electricity has a mind of its own. It can stray from the intended path, looking for a different conductor. Humans happen to be excellent conductors of electricity. That’s what makes a ground fault so dangerous: it places you in the path of danger.

Water is also a conductor. That’s why GFCI outlets should be installed in locations where water could be present, including:

Conventional outlets aren’t equipped to interrupt an errant current. They don’t monitor the current flowing through them the way a GFCI does.

A GFCI looks like any standard outlet, except that it has a “Test” and “Reset.” It has three holes — one for hot and the other for neutral, and a third in the middle for the ground wire. However, unlike a standard outlet, a GFCI is continually measuring the flow of electricity through it and will trip the circuit in less than one-tenth of a second when it detects the slightest variance. For example, if you accidentally drop a blowdryer in a sink full of water, the GFCI will immediately cut the power for your safety.

How to Test a GFCI Outlet

There are also self-testing GFCIs. These outlets periodically test themselves. A green LED light indicates that they’re working properly. A red light means it needs to be replaced.

Ideally, your GFCI outlets will only trip when there’s an obvious hazard, i.e. dropping the blowdryer in the sink. However, GFCIs will trip anytime there’s a current leakage, which could be caused by several things harmless things. This is called “nuisance tripping.” Usually, this suggests the circuit is too long and has too many splices. If this is a problem in your house, consider scheduling an electrical inspection.

Bottom line: Installing GFCI outlets anyplace there could be water is a smart precaution and an easy way to update your home’s electrical system. For help, turn to the Houston electrical contractors at Universal Home Experts. To schedule your appointment, call (713) 364-0226. 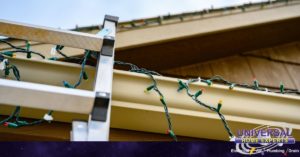 How to Safely Deck the Halls During the Holidays! ‘Tis the season for wrapping gifts and decking the halls! The holiday season has finally arrived

The Dangers of Neglecting Your HVAC

Your HVAC Needs Attention We rely on certain appliances throughout the home to keep our lives comfortable. The refrigerator, oven, bathtub, and dishwasher all make Cleaning House and Your HVAC The time and effort that goes into maintaining a clean and tidy house is something many homeowners dread. However, it’s